The highlight of our week 3 at the S

tate Capitol was the Life, Marriage and Family Rally sponsored by THE FAMiLY LEADER.  We heard from Joel Oster, an attorney and Senior Counsel with The Alliance Defending Freedom.  Joel is an expert in the area of religious liberty, having defended numerous victims across the USA.  Joel cited several cases, including the Gortz Haus

owners in Grimes, Iowa, where individuals were targeted for simply living out their religious convictions, harming no one.  We are grateful for Mr. Oster’s time in coming to Iowa as our guest speaker and instructing legislators, including the House Speaker and the Senate Minority Leader, on the issue of religious liberty.

Watch Joel as well as other speakers at the Life, Marriage & Family Rally:

Baptist pastors met with Representative Chip Baltimore from Boone.  Rep. Baltimore is Chairman of the House Judiciary Committee.  The Iowa Marriage Amendment (the “IMA”–a proposed constitutional amendment to define marriage as between one man and one woman) is in Mr. Baltimore’s Committee.  He disagreed with most of the pastors on the strategy to move the IMA out of Committee.  He believes it is counter-productive to bring the IMA forward, when it is “sure” to die in the Senate (by the way, one Senator had a stroke last week; we can never be “sure” of the future!).  The pastors, as well as THE FAMiLY LEADER, are asking that his Committee vote on the IMA, keeping the issue in front of legislators and the public.

In other action, HF 2073 was introduced by Representatives Windschitl, Fisher, Costello, Hanusa, Landon, Gassman, Huseman, Brandenburg, Klein, Rogers, Hess, Jorgensen, Maxwell, Soderberg, Salmon, Sheets, Pettengill, Heartsill and Schultz.  This House File prohibits abortion by means of telemedicine.  It does not “instruct” the abortionist how to legally get away with murdering unborn children, but flatly prohibits telemedicine abortions.  The proposal is a principled incremental step to save about 3000 Iowa babies’ lives every year.

We are pleased to include this week another video clip of a legislator speaking up during the Session defending life. 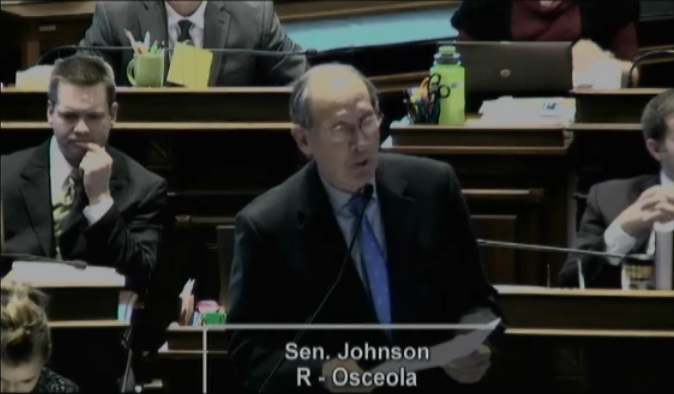 Please let Senator David Johnson know that you appreciate his willingness to publically defend the life of the unborn.  He can be reached at David.Johnson@legis.iowa.gov

Representative Ralph Watts summed it up best last week when speaking about Common Core.  He said:  “Among the concerns that I have is that it takes control of our education system further away from local school districts.  The obligation signed onto by Governor Culver several years ago, regarding assessment of students based on a national measurement, may require our Iowa Department of Education to release student specific education information, which should be of concern to all of us.”  Representative Watts included with his weekly report the following link to a presentation by Dr. Terrence O. Moore from Hillsdale College.  It is about an hour long but very informative on Common Core.

P.S. Help us continue to bring Salt and Light to the Capitol!  Please make a donation to The FAMiLY LEADER so we can have maximum impact.

Watch The FAMiLY LEADER’s Capitol Team answer this question:
What does revival look like in the Iowa Legislature?